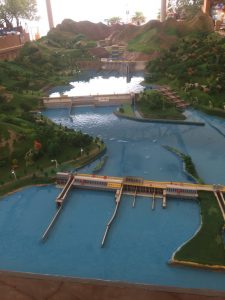 The scenery of the Three Gorge Dam is good, and it is free of charge now, but you need to pay the full ticket of the whole journey, and the round-trip ticket is 30 yuan. The downstream ticket for sightseeing car tour is 35 yuan, the ticket is 150 Yuan for the boat tour, but you can buy 35 Yuan tickets first, then go to the tourist attractions to add extra 30 Yuan to the staff for the boat ticket, which means that you just spend 30 yuan buying a boat trip ticket, and can also travel by car. The travel company’s toll collection fee is high, you can choose to buy tickets directly from the attraction staff, it will be much cheaper.

China’s largest hydropower station embodies the great creativity and wisdom of the Chinese people. It is also a great spectacle of human engineering construction. Green and clean energy provides a strong guarantee for the sustainable development of future generations!

There are more outdoor elevators in the Tanziling scenic spot, and the entire tourist area is free of tickets for Chinese people (as long as the 35-yuan scenic spot transportation fare). The large-scale equipment in the five-level ship lock, dam body and interception memorial park is very spectacular. This world’s first water conservancy project is still worth coming! After driving through the Three Gorges Expressway, you need to obtain a driver’s license, a driving license, and an insurance certificate to change the pass. 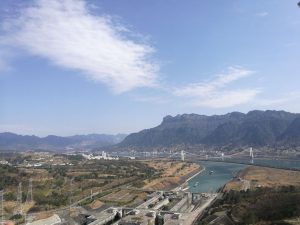 You can first go to the observation deck at the bottom of the dam, which is a good position for the good view of the dam. Then you can go to a position in the middle of the five-level ship lock, and look at the opening and closing water at a close distance, which is very shocking. Finally, you can go to the top of the dam. It seems that ordinary tourists can’t get in. The Yangtze River is still beautiful on the top of the dam, whether it is upstream or downstream. In general, it is still very worthwhile to go. 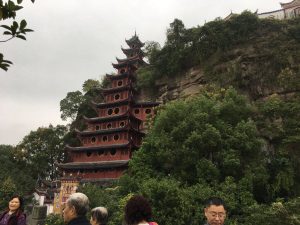 Shibaozhai has a total of 12 floors, and it is next to the Yangtze River. The Yuyin Mountain, which rises from the riverside, is like a goshawk that flies higher and higher, flying between the water and the sky. Do remember carefully walk into the building, the wooden floor trembled under the feet, and you will find out that each floor of the entire Zhailou is supported by several planks on the stone wall. There are no steel nails, no cement, no holes, only a tight bite. Gently stroking the miracle that is close at hand, you will feel the wisdom of the ancestors.

Shibaozhai is the first attraction in Zhongxian County. It is suitable for viewing at the distance. The old man does not recommend going there. First, they are unable to climb up Shibaizhai as it is very steep. Second, the suspension bridge is too swaying. Third, even if you climb up, when you come down, the steps are also very steep.

Shibaozhai really deserves the magical work of nature. Although it has been flooded and turned into a bonsai because of the Three Gorges Project, the miracles created by the karst landscape are still intact. The carvings of Shibaozhai are small and exquisite and unique. 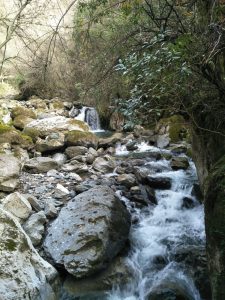 Shennong Stream is located in the western border of Hubei Province. It borders Baokang County of Hubei Province in the east, Wushan County in Chongqing in the west, Xingshan, Badong and the Three Gorges in the south, and Fangxian, Zhushan and Wudang in the north. And features the east longitude 109&#176;56′～110&#176;58′, north latitude 31&#176;15′～31&#176;75′, total area 3253 square kilometers, and 5 towns and 3 townships and 1 national forest and wild animal type nature reserve, 1 state-owned forest Enterprise Forestry Administration and 1 National Wetland Park, and the forest land accounts for more than 85%. Shennong Stream was approved by the State Council in 1970 and is directly under the jurisdiction of Hubei Province. It is the only administrative district in China named after the “forest area”.

If you have time, you should bring your family to this place where people all over the world are fascinated, and it features mysterious scenery, mysterious savages, mysterious north latitude thirty degrees. 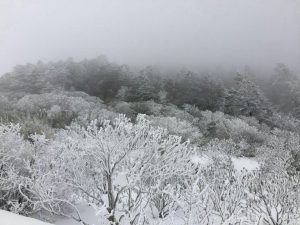 Wu Gorge is the most coherent and neat gorge in the Three Gorges. It is divided into east and west sections. The western section is composed of Jinkui Yinjia Gorge and Jianchuan Gorge. The eastern section is composed of Tie Guan Gorge and Menshan Gorge. The famous 12 peaks of Wushan are located on both banks, with each six peaks in the north and south. The twelve peaks are picturesque and full of gestures, which is the essence of the Wu Gorge. Among the twelve peaks, the goddess peak is the most famous. However, if you visit the Wu Gorge by boat, you can only see nine peaks. And you must disembark if you want to see the Shangsheng peak, Qiyun Peak, and Jingtan Peak, and they can be seen only near the Qingshi Town.

The Wu Gorge is deep and narrow, the sunshine time is short, and the steam in the canyon is not transpiration, which is easy to form a cloud. The clouds and mists have various forms, and they are like a dragon, a jade belt, a waterfall, and a gauze. Under the sunshine, it is very beautiful, forming the famous Wu Gorge flammule.

There are many scenic spots and historical sites in Wu Gorge. In addition to the famous Wushan Twelve Peaks, there are also Luyou Ancient Caves, Dayu Book Terraces, Shennv Temple Sites, and Kong Ming Stone Monuments, all of which attract visitors from all over the world. 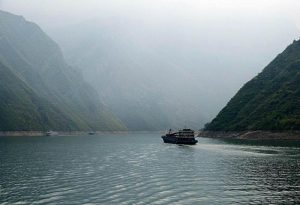 The most suitable way to play Wuxia is to take a boat down the Yangtze River Ferry Terminal in Wushan County and watch the magnificent Wushan Twelve Peaks and the misty Wushan Clouds.

When the boat passes through the Wu Gorge, the clouds are haunting. Although the scenery is not very real, it is very beautiful, with a kind of beauty, which is a bit like the Lijiang River in the mist, but it is more atmospheric than the Lijiang River. 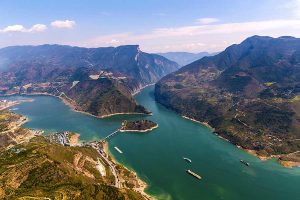 Qutang Gorge and Baidi City are at the same scenic spot with beautiful scenery. The background of the 10 RMB is here. It is one of the Three Gorges, you will pass by when taking the boat visiting the Three Gorges, and even though you don’t recommend it, everyone will surely know about the Qutang Gorge.

The banks of the Qutang Gorge are cutting and steep, the rock walls are towering, and the rivers are rushing through the cliffs. Since ancient times, there have been the reputations of “It is the sword that is more dangerous, it is the Kui Gorge that is more powerful”.

The Qutang Gorge features a plenty of scenic spots and historical sites and they are all concentrated together, which is more convenient for visitors to have a visit. On the upper reaches of the Qutang Gorge narrow, there are Fengjie Ancient City, Stone Sentinel Maze, and Yufu Tower. On the top of the northern bank of the gorge, there are many cultural relics of Baidi City, and there is the thrilling ancient plank road and the mysterious Fengxiang gorge. The south bank has a powder wall with many inscribed copies.

In December 2015, Qutangxia Scenic Area was selected as one of the 30 best tourism new landscapes in the Three Gorges of the Yangtze River.

There are indeed monkeys frolicking sound in the two sides of the Qutang Gorge. Most of the people now have the impressions on the Qutang Gorge from the boat. And what impressed them the most is the red leaves on both sides of the river. The Kuimen stands out. In Baidi City, you can view the magnificent majesty of Qutang Gorge. At this time, relying on the boat you can see its steepness. The peaks on both sides of the strait are steep, like a knife and axe. The mountain is narrow, and the river is forced into a thin belt and squats in the valley. Looking up at the blue sky, the cloud and the sky is at the same line, the water in the gorge is rushing and whistling, and you can hear that the waves of the bow and the waves make a huge cheer. The Three Gorges of the Yangtze River is a place that must be visited in the life.

The scenery of Qutang Gorge is really beautiful. It is a pity if you do not take a visit there.