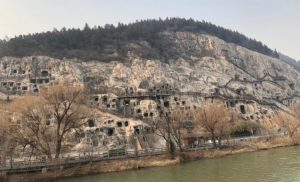 Compared with Yungang Grottoes and Mogao Grottoes, the biggest feature of Longmen Grottoes should be that it is regarded as the royal Grottoes of the Tang Dynasty. In particular, the statue of the Lushena Buddha made by Wu Zetian is full and round, with a wavy hairline on the top of the head, and double brows like a new moon, which are attached to a pair of clear eyes, and are gazing slightly below. Featuring high straight nose and small mouth, it is showing a peaceful smile. Both ears are long and slightly sag, and the lower jaw is round and slightly forward, to make it harmonious. Standing under the image of Buddha, you will feel calm and gentle.

Compared with Yungang Grottoes, the scale of the Longmen Grottoes is obviously larger. At the same time, because of the river winds on both sides of the Yi River, the weeping willows fly gently, and the environment here is obviously better. However, the overall protection of the Longmen Grottoes is not good. Compared with the traffic limit measures of the Mogao Grottoes, there is no restriction on the traffic to the Longmen Grottoes. On the contrary, the plank road for tourists to visit is quite close to the stone sarcophagus, and some small Buddha statues are even brightly touched by the tourists, which has very great effect on the Yungang Grottoes. 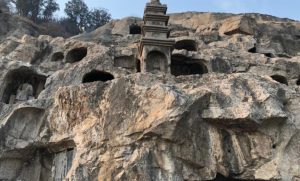 Standing in front of such a grotto, it is actually a tribute to the ancients. They may not have the modern mechanical power, but relying on their own devotion to faith, day after day, year after day, on this cliff, they open up the confession of this life and the hope of the afterlife.

If you don’t ask for explanations, it is suggested that you can listen to pocket guides, and listen to them all the way. It is still a very good way to visit, otherwise you can’t see anything, and it doesn’t mean much.