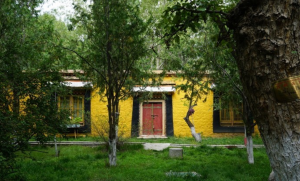 Norbulingka is located on the west side of the Potala Palace. It was built in the 1840s (Dalai VII) and is a place where the Dalai Lama has spent the summer there to deal with government affairs (it is called summer palace). It is a typical Tibetan style garden. The Norbulingka is quite large and covers an area of 360,000 square meters. It consists of several groups of palace buildings, such as Gesangpozhang, Jinse Pozhang, and Dadan Mingjiuzhang. Among them, the Cuoji Pozhang (Huxin Pavilion) is the most beautiful scenic spot in the Norbulingka. “Da Dan Ming Wen Pozhang” is the new palace of the 14th Dalai Lama. The Tibetan language means “the eternal palace.” It is truly magnificent, and full of flowers! However, photographs are not allowed inside the palace. There are many Thangkas and countless treasures, and one of the gold thrones made of pure gold is staggering!

The architectural wall of Norbulingka is yellow, which is a symbol of the color of the Yellow Church. The tour guide will introduce that in the park, the yellow wall refers to the residence of the monks, and the white wall refers to the residence of the laity. Norbulingka highlights the natural atmosphere of gardens and plants on the snowy plateau, with artificial buildings dotted around it. Through the careful management of the Dalai Lama, the Norbulingka has built various palaces, villas, pavilions, otters, and planted a large number of flowers and trees. It has formed a large garden of 360,000 square meters and has become an open park and museum for people to visit and hold various holiday activities.

Many of the palaces inside have murals, which are all historical artifacts, and the painting are very beautiful. In fact, some people may feel that Norbulingka is not very big. There are many palaces that require you to walk slowly to enjoy the special charm there.