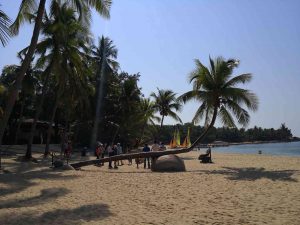 Located at the western end of Sanya Bay, The End of the Earth and the Corner of the Ocean is a peaceful and beautiful beach. There are many different kinds of rocks on the beach. The famous ones are the two megaliths which are engraved with ” End of the Earth ” and ” Corner of the Ocean “. They have always been regarded as a symbol of love and one of the landmark landscapes of Sanya.

In addition to “Tianya Stone” and “Haijiao Stone”, other famous stone carvings include “Nantianyizhu” and “Sun Moonstone”, which respectively symbolizes wealth, and love. In addition, the scenic spots such as celebrity sculpture parks, couple trees and other special attractions are also worth a visit. 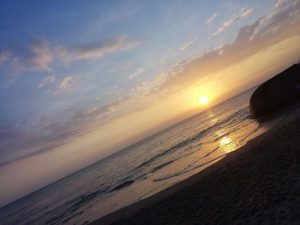 There are crystal balls which are worthy more than two million hanging in the square. There are many shooting places and place props for wedding photos. The battery car is free for those children who are no more than 1.2 meters high. The battery car can be conveniently placed at each station. The scenic spot is very large, and it takes a day to fully play it. Strollers are still recommended to carry or else you will feel it too tired if you take kids with you.