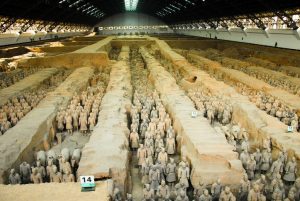 Although the Terracotta Army Museum is the eighth wonder of the world, many people must not be interested in such cultural regrets. Fortunately, you will meet a very professional commentator, and even if there are crowed people, you will still feel it very worthwhile. There are spectacular people in the queue. After entering the gate from the security check, it will take about 1 kilometer to get to the terracotta warriors.

The scene of the Qin Terracotta Warriors is spectacular, but the details are more impressive, and not to mention thousands of people with different facial expressions, and clear hair, even a hidden hand struts are vivid. Chinese craftsmen spirit is not lacking in 2000 years ago, and strong visual impact and national pride are born when you are visiting the Terracotta Army Museum. After more than two thousand years has been passed, every character is still vivid.

The Mausoleum of the First Qin Emperor was 1.5 kilometers away from the Terracotta Warriors. Because of the heavy weight of the mausoleum, it is said that there are more than one million tons of mercury. Once the mercury is leaked, it will cause poisonous gas pollution. With modern technology, it is impossible to excavate. However, some people believe that in addition to technical factors, the economy is also a major obstacle to excavation. The Mausoleum of the First Qin Emperor is the largest tombstone that has been found. It is equivalent to removing a mountain before the actual excavation.

Anyway, if you are interested in Chinese history, The Terracotta Army Museum is an ideal option that should be included in your itinerary in China.